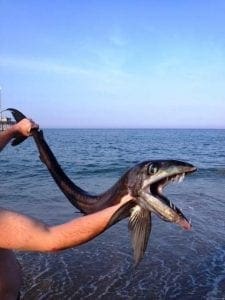 Ok, let me start by saying two things – first is Happy Holidays to all of you who have helped make Fishbites what we are today! We hope you have a great weekend and many more catches headed your way!

Secondly, these fish haev nothing to do with Fishbites other than the fact that they are fish and they were caught. We just thought you’d enjoy seeing some really interesting catches.

Ferocious-looking sea creature is a lancetfish

Mysterious, deep-sea denizen with fang-like teeth washes ashore alive in North Carolina; ‘I don’t know what I would do if one of those bumped into me’

A ferocious-looking sea creature that washed ashore last week in Nags Head, North Carolina, has been identified as a long-nosed lancetfish.

The deep-water denizen, its mouth bristling with fang-like teeth, was alive but listless when it was first spotted south of Jennette’s Pier.

It was photographed and released, but washed ashore a second time, World Nature Newsreports. That implied that the fish was ill, and perhaps dying.

It’s not clear what ultimately became of the cannibalistic critter, but it got people talking, and the photos accompanying this story have been widely shared since first being posted on the Jennette’s Pier Facebook page last Thursday. 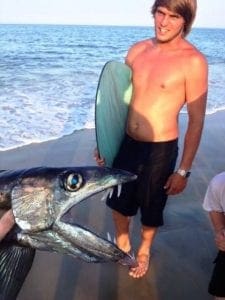 “I don’t know what I would do if one of those bumped into me, but it wouldn’t be pleasant,” reads one of the Facebook comments.

The headlines generated by this rare capture have been understandably sensational.

You’d think people would be fleeing inland after reports such as these.

But if anything positive has come from this peculiar capture, it’s that lots of people now know about the long-snouted lancetfish (Alepisaurus ferox).

It lacks scales, for starters, and boasts a long, wavy dorsal fin that adds to its scary appearance and mystique.

Lancetfish, which are found in tropical and sub-tropical waters around the world, can measure nearly seven feet. They prey mostly on small fishes and crustaceans, but also other lancetfish.

But they’re not swift swimmers and are themselves preyed upon by larger fish, including tuna and sharks.

Lancetfish are capable of swimming quickly in bursts, however, and rely largely on ambush techniques to snatch their prey. And yes, those long, sharp teeth work wonders in securing their meals. 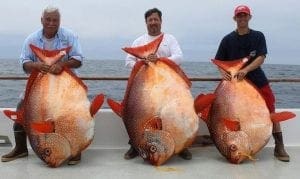 It’s unusual to catch one opah on a sportfishing boat, but anglers out of San Diego manage to land three of the brightly colored ‘moonfish’ on one day

Anglers aboard the San Diego-based Excel have spent the past several days loading up on tuna and yellowtail, during what many are describing as the most phenomenal bite in regional waters in decades.

But standing out among the yellowfin tuna, bluefin tuna, and yellowtail are three enormous fish shaped like the moon and nearly as radiant.

They are opah, weighing in at 151, 180, and 124 pounds, caught respectively by Armando Castillo, Joe Ludlow, and Travis Savala (see photo).

This is because the brightly colored fish do not typically swim in large schools. They’re more commonly found in tropical and sub-tropical seas, and their appearance in local waters is often associated with warm-water events such as El Niño. (El Niño-like conditions are what lured the tuna and yellowtail into Southern California waters.)