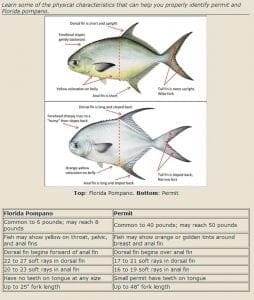 Can you tell the difference?

These fast-swimming coastal fishes are a challenge to catch and, as a result, are coveted by

Florida anglers; the pompano has the added enticement of being a popular dinner entree. The two species are remarkably similar in appearance but very different in size as adults—a situation that confuses many anglers who, thinking they have reeled in a world-record-size pompano, are disappointed to learn that they have actually hooked a permit, and a small one at that.

Pompano and permit are members of the jack family, Carangidae, which includes about 140 species worldwide. Jacks are characterized by their silvery, thin bodies and deeply forked tail fins. Many have elongated dorsal fins. Florida relatives of the pompano and permit include palometa, crevalle jack, yellow jack, lookdown, amberjack, and a variety of scads.

Both pompano and permit have distinctive plates at the back of the mouth that help them crush the hard-shelled crustaceans and mollusks they eat.

Pompano are coastal fish and are generally found in schools along sandy beaches, around inlets, and in brackish bays and estuaries, where they inhabit oyster bars and seagrass beds. They tolerate a wide range of environmental variables, including cold temperatures, low dissolved-oxygen levels, and low salinities—as long as the changes occur gradually. Although typically a shallow-water species, they have been found in waters up to 130 feet deep.