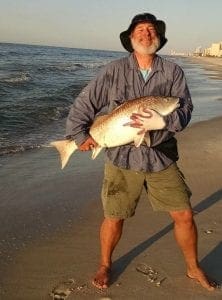 We recently received this kind letter of gratitude from surf caster Chris Laimit.  It really needs no introduction.  His appreciation and story speaks clearly;

I have not fished in more than 2 decades. I used to surf cast off of Long Beach, Long Island when I was a young man –but I was never much good. I could go out on a party boat with people on both sides of me reeling in Blue Fish and I would get skunked. In short –I stunk at fishing on my best day! I moved to Colorado in the early 1980’s and gave my surf casting rig away since there is not much surf in Colorado.

I recently went to Orange Beach, Alabama and on a whim brought my old dusty 7’ Ugly Stik with my Pflueger 641 spinning reel. We stayed at the Regency Isle which is within a mile of the Florida border. I met a man fishing in Florida and he told me what equipment I should have to fish here.

So I had 20 lb. braided line put on my reel with a 30 lb. mono shock leader using a 3 ounce pyramid sinker on a Pompano rig with #2 circle hooks. He said get yourself “Fish Bites” shrimp or other flavors and give it a go. Bought an Alabama yearly fishing license and out in front of the Regency I went to fish.

I caught Whiting, Catfish, Black Drum, Red Drum, Pompano & Permit fish all with Fish Bites! I released all of the big fish and kept a couple of the Pompano & Whiting for dinner. I didn’t even try using fresh bait or lures as there was no need –Fish Bites made me a star of a fisherman! Thank You so much for making and sharing your wonderful recipe for catching all kinds of fish!

The last fish I caught was an incredible story all by itself. I went out at first light and watched the sun rise. I had recently purchased a Shimano Sedona 4000 FE, from J & M Tackle because my Pflueger reel seized up on me (-in my ignorance I was rinsing it with hot fresh water…).

Anyway, I went a week and a half without catching anything. I was praying and asking God to give me a big fish so that I could see how my new reel worked with a big fish. Sometime later my rod tip bent down big time. I ran to my rig and started reeling in only to find that there was no tension on the line, -I thought he had spit the hook out. So, I kept reeling in and felt a little bit thinking, ‘at least I didn’t lose my pompano rig’.

But then I had to hold on for dear life as this fish started to and then kept pulling and pulling the line off of my reel! I held on and he kept pulling me left towards the Florida border. A crowd was gathering around me because they saw how much my pole was bending the entire time. I got within yards of the Florida border before landing this big Red Fish.

I was imagining that if a state inspector came by (and asked to see my fishing license) and me explaining that I started fishing in Alabama… He was saying (in my mind) “sure you started fishing and catching this fish in Alabama!. I don’t know how heavy this fish was but I had a tape measure and he was 36.25 inches long! It took me 25 minutes to land him and he kicked my butt! My shoulder was sore and my hand kept cramping up on me, but man o’ man was it so much fun. I released the big guy and can’t wait to go fishing again with Fish Bites! Thanks again for such an amazing product –I am a true believer and a Fish Bites disciple now.

Here are the 2 people whom helped me along the way! The man I met in Florida is Jim Maddox of Kentucky, and the gentleman whom helped me land that 36.25 “ Red Fish was Otto Hecksher of Pennsylvania!

In the gallery is a picture of Jim, and a photo of Otto & I and the Red Fish, and another showing Fish Bites and another Black Drum…

I caught most of the fish using either the Chartreuse or Red Shrimp, Clam or Sand Flea Fish Bites. With the Chartreuse Shrimp being the most consistent –they are awesome.